October 16, 2007
by Nicole Beurkens, PhD
in Blog
one Comment 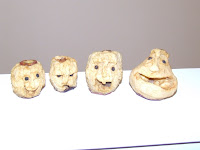 Okay – I’ll share the apple guy update first because so many of you have been hounding me about this. Apparently there is now an apple guy craze sweeping the nation! Here is a picture of the apple guys at our house today – a little over one week since they were created. You can see the change in facial expression and overall aging of the apples – pretty cool!

Now onto my really great story…
We have two young men at our center who come for instruction in the afternoons, including lunchtime. They usually eat in the kitchen with one of us while the rest of the staff eats in the lounge next to the kitchen. Today we decided to leave them to eat lunch without us while we (the staff) ate in the lounge. We heard the boys finish eating, and then they wandered out to see what we were doing. Without really thinking about it too much we told them to head back into the kitchen and we’d be there in a minute, since we were still finishing up our lunches. They went back in there and after a few minutes I could see some movement in the kitchen from where I was sitting.

I got up to peek through the door and I saw an amazing sight. These two boys had opened up the dishwasher, which was full of clean dishes from the day before, and were unloading it and putting the dishes away! One was taking the dishes out and handing them to the other to put in the cupboard. The cup cupboard quickly got full, so they figured out that if they stacked the cups they could fit more in there. When they couldn’t stack anymore they moved on to other dishes in the dishwasher. But, they couldn’t completely empty the dishwasher because of the remaining cups and a few other things they didn’t put away. The next thing I observed was them closing the dishwasher and digging around under the sink to find a sponge and some dish soap. One of the boys tried really hard to get the cap flipped up, but couldn’t do it. They both stood and looked at the bottle for a minute and then one of them unscrewed the cap – what a great idea! Together they filled the sink with water and some soap (I was worried we might end up with large amounts of suds all over the floor, but they appraised the amount of soap that was needed really well!). Then one of them scrubbed the dishes while the other rinsed.

I seriously could not believe I was seeing this. These two boys used to be incredibly passive and prompt dependent, not to mention failing to see the redeeming qualities of tasks like doing the dishes. What I observed today was two boys co-regulating with each other, persevering, problem solving, thinking flexibly, appraising, and initiating the whole thing without any adult interference. It was so great to see how well these guys are learning to think and act and work together without adult scaffolding. We all decided that we need to leave them alone in the kitchen more often – and make sure we have a video camera set up!

So – here’s to guided participation, and framing, and experience sharing, and scaffolding, and everything else we work at so diligently to pave the way for moments like what I observed today. It was a good reminder to me that sometimes as adults we need to butt out and see what kids can do on their own – they may surprise us!

Until next week,
Nicole